⭐⭐⭐⭐⭐
Get your free copy at Smashwords and dive in
into this immersive forbidden office romance... 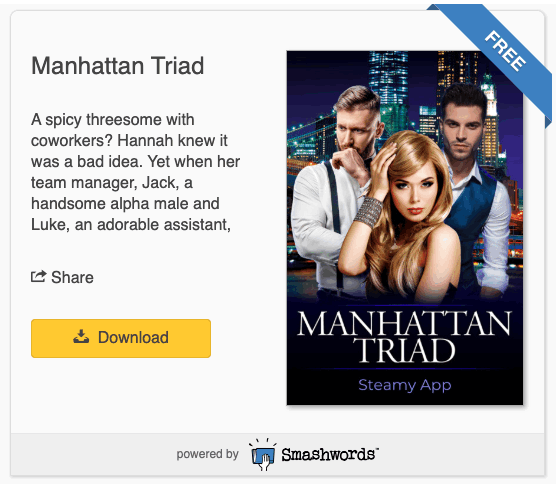 It wasn’t because of the pay which was just above average.

Or the view from the office that looked at the countless gloomy skyscrapers and a crowd of billboards – some of which she designed, scattered all about.

Not even her position at an advertising company, that both demanded her creativity and was slowly killing it off at the same time, was the reason for her joy.

That honor belonged to the men in her department. Well, two of them, to be exact.

Jack – the team manager, an alpha male that oozed confidence and Luke, a shy, adorable assistant that often reminded her of a puppy.

The two of them just stood out, and she couldn’t resist admiring them.

Of course, she would never go further than that – they were coworkers after all.

Trying anything at all would simply bring unwanted complications. But she wasn’t looking for anything more. They were just eye candy, a way for her to make her look forward to the work.

Besides, harmless fun never hurt anyone before, right?

Pointy heels clicked against the polished floor as she strode to the manager’s office.

She gently knocked on the door, and waited for the voice that said, “Come in.” That deep voice that made her insides tingle just by hearing it.

She clutched the USB flash drive in her hand and inhaled.

Then, she opened the door and made her way in, swinging her hips slightly. She could feel a pair of eyes, as dark as abyss, following them.

“Boss, I have finished the task you appointed to me earlier,” she said, smiling while tucking her long, silky waves, the color of copper, behind her ear.